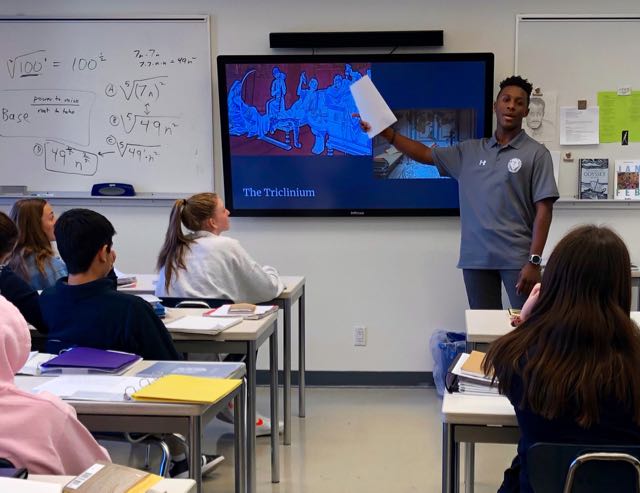 Eighth grade Latin students had a special substitute this week, when Herbert Toler ’18 returned to teach a lesson on Roman culture. Eighth grade Latin teacher Joan Wentworth invited Herbert back after hearing about his current success with high school Latin.

Herbert, who started at St. Hilda's & St. Hugh's in the Beginners class, is currently attending The Pingry School in New Jersey, where he takes Latin I. He told Ms. Wentworth that his Latin classes at Pingry are "easy," thanks to the excellent preparation he had in seventh and eighth grade Latin.

“Herbert was an exceptionally diligent Latin student here,” Ms. Wentworth said. “Latin was never simple for him, but he had such drive and interest, along with a good memory for forms, and he ended up doing very well.”

Herbert’s eighth grade students were attentive and appreciative, Ms. Wentworth said. “Our students are so polite and generous. They were engaged and took notes.”

Herbert’s presentation also allowed time for students to ask him questions about high school. “He made sure to tell them about the benefits of taking Latin in high school. That was my request!” Ms. Wentworth said with a smile.